Cholesteatoma is an abnormal growth of skin within the middle ear (see figure). It begins in the middle ear and may spread to the mastoid bone behind the ear. It is also known as a “skin cyst” in the eardrum and middle ear.

Collapse of the eardrum interferes with the normal replacement of skin. Normal skin of the body sheds into the environment. In the ear, the normal eardrum sheds its skin into the ear canal producing ear wax. A collapsed eardrum cannot shed this dead skin. Instead, it collects into the retracted or collapsed area of the eardrum. As the collection grows, skin from the ear drum is forced into the middle ear where it continues to grow.

Why is cholesteatoma dangerous?

Cholesteatoma is a collection of dead skin that harbors bacteria and infection. This leads to chronic inflammation that can erode and destroy structures inside the ear. Structures that are at risk are the structures of hearing and balance and the nerves that control the movements of the face. Bacteria from cholesteatoma can also result in severe ear infections. Because the brain is just above the ear, bacteria from cholesteatoma can result in brain infections such as meningitis and brain abscesses.

It is important to remove cholesteatoma to prevent these serious health issues. The minimal risks associated with having surgery far outweigh the risks of leaving cholesteatoma unaddressed.

What are symptoms of cholesteatoma?

More advanced cholesteatoma that has affected other ear structures can produce more serious symptoms such as meningitis, weakness of facial muscles, and dizziness.

How is cholesteatoma diagnosed?

Cholesteatoma cannot be formally diagnosed until it is removed during surgery and examined under a microscope.

However, the clinical picture prior to surgery can strongly hint at cholesteatoma:s

How is cholesteatoma treated?

A very small cholesteatoma that is limited to the eardrum may be observed. However, these are very rare. Most cholesteatomas are in unsafe locations. Unfortunately, there is no known treatment to remove cholesteatoma without surgery. The risks to the hearing, balance, and facial nerve structures and the brain from non-surgical approaches far outweigh the risks of removing cholesteatoma.

What does surgery consist of?

The medical term for surgery is tympanoplasty with middle ear exploration, and if necessary, tympanomastoidectomy. Surgery is done in the outpatient setting under general anesthesia. Patients typically go home the same day. Three weeks later, they return to the clinic to clean out the ear.

The primary goal of surgery is to remove cholesteatoma and prevent further damage to the ear. Usually this requires two surgeries. The first surgery removes the cholesteatoma. This may be done through the ear canal (e.g. tympanoplasty), but and often requires an incision behind the ear (tympanomastoidectomy, also called posterior tympanotomy with mastoidectomy). Nine to twelve months later, a second surgery examines the ear to confirm the removal of cholesteatoma and to reconstruct hearing. This “staged surgery” is the standard of care for widespread cholesteatoma. Hearing outcomes are generally better when surgery is staged.

A small cholesteatoma may be removed in one surgery through the ear canal. Often, a second surgery is needed to rebuild the structures of hearing.

What are the risks of surgery?

Remember, the risk of severe complications from deciding not to remove cholesteatoma far outweigh the small risks of surgery. Risks of surgery are less than 2% and include:

What happens after healing is complete?

Outcomes of surgery are centered around recurrence of cholesteatoma and hearing recovery.

In patients with repeated recurrence or severely damaged middle ears, “closing off the ear” is a possibility. This involves plugging the Eustachian tube, removing the ear bones, eardrum, canal skin, and the air containing spaces of the mastoid bone. An osseointegrated or cochlear implant may be used provide hearing in that ear. The choice depends on the configuration of hearing loss.

Recovery of hearing. A primary goal of cholesteatoma is to allow a patient to hear without hearing aids. This is highly dependent on the extent of cholesteatoma. Most patients who are missing only one middle ear bone and no underlying inner ear hearing loss have the best outcomes. Two-thirds of these patients can expect to hear within 15 dB or better of their inner ear hearing (called an “air-bone gap” on audiometry). If the other ear has normal hearing and hearing was the same in ears prior to cholesteatoma, 15 dB translates to a just noticeable difference between ears. Even in the best of hands, reconstructing hearing with middle ear prostheses is difficult and outcomes unpredictably vary. When patients do not have a satisfactory hearing outcome, hearing aids or an osseointegrated hearing aid usually result in great hearing. It is now known that untreated hearing loss has severe health consequences. Thus, it is crucial to treat hearing loss aggressively. 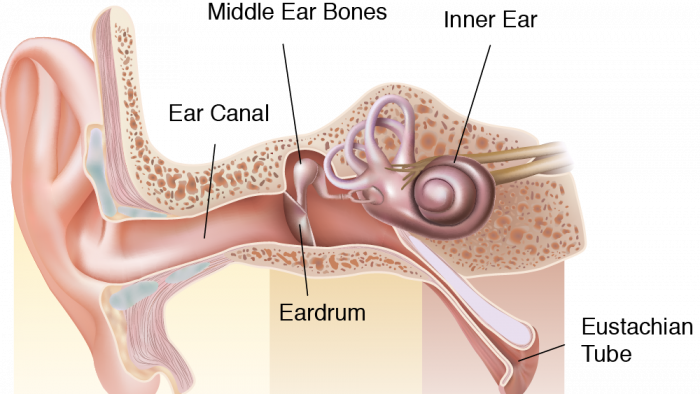